A Sound Story About Audrey And Brad - All Levels 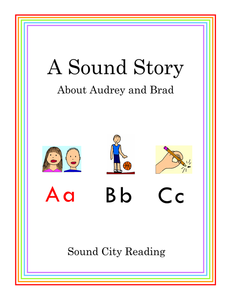 This book is used with students at all levels of instruction.  A Sound Story About Audrey And Brad introduces all of the sounds in the English language, using pictures to represent the specific speech sounds.  For example, students see a growling dog (r sound), the wind blowing (w sound), and a bouncing ball (b sound). Each picture is paired with capital and lower case letters (in two different fonts) that represent the same  sound in words.  The teacher reads each section of the story aloud and points out the picture and letters, giving their sounds.  Students listen and watch, repeating the sound as the teacher points to the picture and each of the letters.

The sound story is used to teach the alphabet to beginning students, but the sound pictures are used at every level from beginning through advanced.  The pictures are used on sound charts which are found at the beginning of most of the Sound City Reading phonics books.  The sound charts show each of the phonetic patterns that have been taught along with the related sound pictures. Similar patterns are grouped together, making it easier for students to remember them.  For example, all of the long vowel patterns are grouped together on one chart, all of the consonant digraphs are grouped together on the same chart, and so on.  At the beginning of each day's lesson, the teacher points to the patterns that have been taught on the sound charts, while the students say the sound for each pattern in unison.  If students can't remember the sound for a particular pattern, the teacher can point to the sound picture to remind students of the correct sound.

The sound pictures are particularly helpful because of the phonetic structure of the English language.  Sometimes the same pattern can show more than one sound, as in ea/eat,  ea/head, and ea/steak.  Other times, several different patterns represent the same sound, as in ai/rain, ay/play, and a_e/safe.  In both of these cases, sound pictures can be used to show students how the patterns and sounds are related.  See the sample pages for these charts below.

Videos are available to see and hear part one of the sound story read aloud.  Click on VIDEO on the menu,  then on the submenu click on SOUND STORY PART ONE VIDEOS.